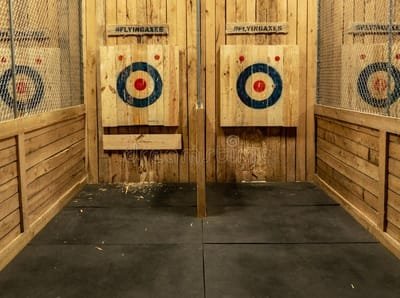 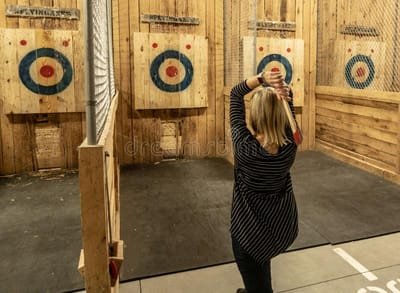 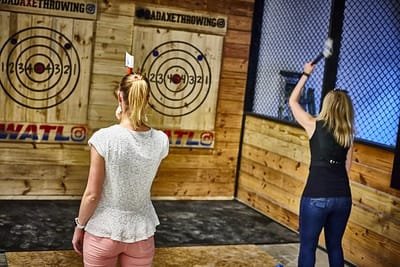 What Is Axe Throwing

​​​​The modern sport of Axe throwing started in 2006 in a backyard in which the competitor throws an axe at a target, attempting to hit the bulls eye as near as possible. Axe throwing has historically been an event in lumberjack competitions.

What is Axe Throwing, and How Do You Do It?

What is Axe Throwing?
Axe Throwing is a target sport, similar to darts, and it’s on the rise. Players stand behind a foul line, approximately 10-12 feet from the target (depending on venue and organization), and try to throw their axe into the target. The targets are labeled like most target sports, with the highest points in the bullseye, and decreasing the further your axe lands from the center. At the end of the game, players add up their throws and the highest score wins. Every place has slightly varying rules, but those are the basics.

What can I expect at Total Axe Throwing?
When you come to Total Axe, you’ll start by signing our waiver. Once your group has checked in, a coach will give you a short safety lesson to make sure that everyone handles axes and other items properly and no one gets hurt. Each group is put into an arena – our term for a pair of targets – and the coach teaches each person to throw individually.
We start everyone with a two-handed throw for simplicity. While this may not seem “natural”, it is the easiest to learn. Just like learning to throw a baseball, what comes naturally isn’t necessarily the best way to throw. Once everyone can stick the axe, you can compete against each other.

What’s the difference between walk-in throwing and reservations?
Walk-in throwing is first-come, first-served and limited to axes only. During peak times, small groups may be combined into one arena. Once our coaches teach you how to throw and score, they are there to make sure everyone gets equal time on the targets, and things runs smoothly.
Group Reservations guarantee that your group will have the lanes to themselves, and at a discounted price. After your coach shows you how to throw, they will keep score for you and run a tournament if you want.
The Ninja Package offer throwers other items such as throwing knives, throwing stars, metal playing cards, and even a tactical throwing shovel!

How does scoring work during a session at Total Axe?
Each game is five throws. You get the highest point value that the blade of your axe touches . Our bullseye is worth 6 points, and each surrounding ring decreased to 4, 3, 2 , and 1 points. To score 6 points, your axe only has to touch the ring around the 6 (which has a 4 inch diameter).
On the last throw, you can “call the 8-ball.” Our target has a small circle with an 8 in each corner. If you “call the 8-ball” on the last throw and hit one of them, you score 8 points. If you hit anywhere else, it’s worth 0.
At the end of the game, the higher score wins. In leagues, matches are 2 out of 3 games with players switching sides after each game. In tournaments, matches can be as long as 4 out of 7.

What are axe throwing leagues?
Leagues at Total Axe are usually 7 weeks, and cost $98/person. Leagues are solo, meaning throwers compete individually, not as a team. Each person plays 1-on-1 matches against everyone else participating in the league. Every week, league members get 30 minutes of warm-up time, then play 4 matches consisting of 3 games. The final week is a double-elimination tournament for the league championship, trophy, and a gift card.
League members get benefits of discounts on all throwing, and special access to lanes during other league times. League members get $30 off of future leagues as long as they remain members.

How good do I have to be before I can play in a league?
Our leagues are open to anyone who wants to play! Skill levels run from the first time thrower all the way up to our seasoned pros who have thrown for a few years. For some of our throwers, leagues were their first experience with an axe!